In the year 2008 the Chino Valley Town Council took note that transportation vouchers which were provided by the state for the economically deprived was only lasting this population approximately 3 months and the money for the vouchers were exhausted for that year. Also, it was noted that there were two (2), practically new nine (9) passenger disability equipped buses sitting idle, which the Town of Chino Valley already had. The council checked with ADOT into the process of starting a small Rural Transit system which would provide bus service throughout Chino Valley and into Prescott. 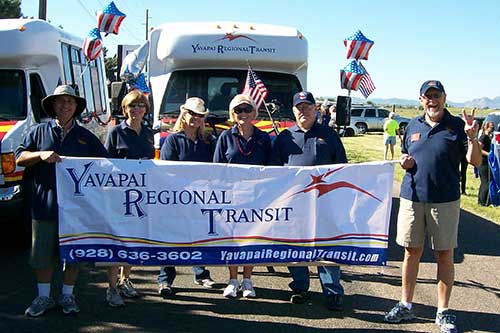 During the planning process, it was decided not to start a system which included a Para-Transit service. This decision was made do to the limited buses and funds that we had, and the grant requirements. Instead, we elected to incorporate a Fixed Route, deviated system, which would provide curb to curb service. It was also decided that we could deviate one-half (1/2) mile from the route without any major effect to maintaining delivery to the bus stop times. Subsequent to that decision, the majority of our calls for service, fell outside the ½ mile deviation limits, and were extended to 1 mile.

In 2009, it was decided to apply to the Arizona Department of Transportation (ADOT) for a Federal Transit Authority (FTA) 5311 rural transit grant. With the approval of the Town Council the CHINO VALLEY TRANSIT was established. The Parks and Recreation Manager was assigned by the town manager to be the Transit Manager. Prior to submitting our first grant, the Routes, bus stops, and times were established. CVT developed a brochure and a marketing plan was completed, and we were ready to go.

In the beginning, the Transit management held several grand openings at various locations such as Safeway, Alco, and Walgreens on the weekends where we could see the most people. The buses and drivers were present and talked to the people about CVT. The newspaper was notified for stories, and the transit management attended several service club meetings describing the service. The transit assistant would also stand outside these businesses and pass out brochures. This was an attempt to market the bus service to the citizens.

We started the bus service in Chino Valley after receiving notice that we were awarded a grant in August of 2009. Our new grant started on October 1st 2009. Within a week, we started the run in Chino Valley. In November of 2009, we started our planned route into the City of Prescott. Our system in Chino Valley ran on Monday’s and Wednesday’s, stopping at 14 bus stops on the hour. This route ran between 8:00 AM to 2:00 PM. On Tuesdays and Thursday’s the system made 2 trips into Prescott once in the morning, starting at 8:00 AM, and once in the afternoon starting at 12:30 PM. We only had 2 bus stops in Prescott. 1) was at Walmart on the west side of Prescott, and the 2nd ) was the Yavapai Regional Medical Center Hospital, and back to Chino Valley.

In the beginning, we had a 3 hour delay in the middle of the day, and went back to pick up the passengers we left off earlier. We completed both rounds at approx. 2:30 PM. We noticed that the ridership started picking up on the Prescott route.  This route continued until July of 2011 when CVT started servicing the Gateway Mall on the east end of Prescott. After going to the mall we noticed that our diversions and passengers started picking up even more. We were now taking passengers to Goodwill, DES, Social Security office, Prescott Town Square, Library, Yavapai College, Casino, Frontier Village, and many other locations. In approximately August of 2011, the CVT management decided to eliminate the 2 hour delay on the Prescott route, and implement a third, middle trip, into Prescott. The system incorporated a middle route Start at 10:30 AM which reversed the route to pick up all the people left off earlier. This reversal of the route provided the passengers with a shorter wait time, and returning them to their original bus stop in Prescott and Chino Valley. We again noticed that our ridership continued to grow even more.

During this period of time, it was noted by the drivers, that some of our riders had a difficult time paying the one dollar for the ride. In discussions with these riders, they told us that they would stay at home, because they could not afford to pay for a bus ride. At a drivers meeting, this problem was discussed and the drivers decided to donate $20 each and start a program to provide a 10 ride ticket to the people who could not afford to pay the bus fare. One of the success stories of this fund, was that one 94 year old woman took 44 rides in three months prior to her passing. Subsequent to that initial start, several service clubs have donated money to our fund which is used exclusively for that purpose. The fund was called “CVT Helps” which was converted to “YRT Helps” and the money is held by the YRT 501c (3) foundation.

In the summer of 2013, CVT was notified by the Chino Valley town management, that at the end of the current grant, the Town would no longer sponsor the transit system. In discussing this change with the drivers and others, it was decided that CVT would be converted into a 501c (3) non- profit and we would rebrand the system with a new name and logo. CVT management decided to adopt a name that would not represent any single community but the tri-city area as a whole. After many meetings, it was determined that our new name should be YAVAPAI REGIONAL TRANSIT INC.

During the conversion from Chino Valley Transit to Yavapai Regional Transit, YRT management started looking at compiling a Board of Directors; parking locations for the buses, fuel contracts, printing contracts, Insurance for the buses and office space. We also had all the buses re-branded with our new logo, phone number and website. A Memorandum of Understanding (MOU) between the Town of Chino Valley and YRT was signed. That MOU provided YRT with the buses, all the LTAF funds, and the right of entry to install bus signs and shelters inside the town’s right of way, and the town would provide an outside phone line for YRT. We also established a new website.

At the same time we visited the Yavapai Regional Medical Center and were provided a stipend of $5,000.

We also received a grant from the Yavapai Community Foundation for an additional $1,000.

In 2014, YRT had been asking for a new bus for a couple of years. Lake Havasu City elected to shut down their system; they had taken delivery of a new larger bus, which had not been put on a route yet. YRT agreed to pay Lake Havasu City the matching funds that they had paid, and we took ownership of the bus. It was a 15 Passenger cutaway bus. We found out that the drivers of that bus needed a Commercial Driver’s License (CDL).

Between 2014 and 2015, YRT management took a long look at expanding into Prescott Valley. We found locations where YRT could install bus stops and yet divert into areas to help people move around. There has been a new route established, which will allow the citizens of Chino Valley and Prescott Valley, to travel to groceries stores, entertainment centers, clothing stores, doctor’s appointments, along with a variety of outings that they are unable to get to now. The permanent route selection is still in progress.

It is anticipated that YRT will start a limited route into Prescott Valley in May of 2015 so we can evaluate what items should be changed and/or moved around.

We are also anticipating our new 14 Passenger bus be delivered in May.

During the period between our startup and current dates, CVT and YRT has participated in many community events. During the past few years, YRT has worked with the Chino Valley Elks Club during Christmas, by taking two busloads of under-privileged children to Walmart for clothes and other essentials for Christmas. It has been a yearly tradition to provide the users of YRT with free rides throughout the month of December.

For several Years, we have entered the buses in various parades in Chino Valley and Prescott. We do this to market the transit system to the public.

To help the system finance the matching funds, the marketing manager has been selling window advertisements on all the buses. This has become a very popular fund raising tool for YRT.

YRT has worked with the Prescott Tourism Commission, to bring in conventions and promote the transit system as well as the area, including Chino Valley and Prescott.

All rides are FREE until further notice. Yes, free! Come ride the bus.